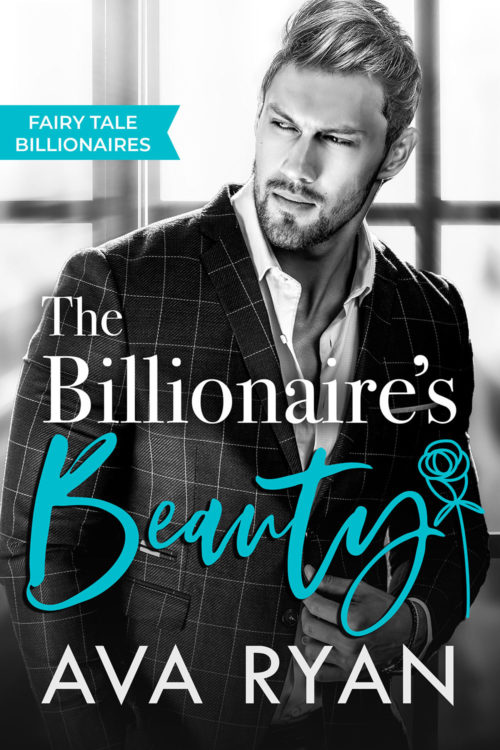 From the new fairy godmother of petal-dropping romance, Ava Ryan, comes The Billionaire’s Beauty, the second standalone in the Fairy Tale Billionaire series.

They call me The Beast.

Some people think I’m a bully. I’m not here to make friends.

I ruthlessly clawed my way to the top of the real estate market in NYC. No friends needed.

We have an unspoken arrangement: she pretends I’m smarter than she is while I pretend not to notice how sexy she is.

That was before she gave me her notice while wearing that dress.

I can do a lot. Run my family empire. Ignore the loneliness the top brings. Punch anyone who looks twice at her.

But letting her go without a fight?

Over my dead body…

I take a good look at Bellamy for the first time, wondering if I’ve been imagining the way she’s gotten under my skin in the last several days.

Bellamy is crisp. She is cool. She is eminently professional. The thing she is not? Challenging. The thing she does not do? Make me think about her as a person.

But no, there it is. The veiled What are you going to do about it? in her stiff posture, squared shoulders and glinting brown eyes.

And, I gotta tell you, I find it fascinating.

One other thing I should mention? Bellamy Forest is easy on the eyes.

Look, I’m a heterosexual guy. I’m into women. Into everything about women. All women are beautiful.

But Bellamy Forest is beautiful. About average height, she’s a perfect figure eight, with plenty of boobs in front, tons of ass out back and a tiny waist in between. She’s fit, with toned legs and shoulders.

I love a fit woman.

And let’s talk about her face for a minute. Big brown eyes, like I said. Cute little nose. X-rated mouth. English rose complexion. The kind of long and sun-kissed wavy brown hair that belongs in some glossy magazine ad for a high-end salon.

I’m not going to lie. I noticed all that about Bellamy the second she walked into my office for her interview a year ago. I also noticed her summa cum laude degree from Barnard College, her full-time gig as a tutor that helped her finance said degree and her ambition to work her amazing ass off and save money for law school. I can control my baser impulses when necessary, and it was necessary if I wanted to hire the best candidate for the job. Not to mention the fact that I don’t want to get sued for sexual harassment. So I put my dick on lockdown, my attraction to her on a shelf and hired her.

Things have worked out great. Until now.

Now? My attraction is off that shelf. It didn’t ask for my permission to jump down. It just did. And my dick is starting to seriously resent the lockdown.

“Actually, we’re not done.” I stare her dead in the face, eager to see what she’ll do next. Not a good idea, for which I partially blame this second gin and tonic. “I’m going to need you for a bit longer tonight. You might want to let your friends know you’ll be late.”

Confession: I went to the office kitchen earlier for a cup of coffee, during which time I overheard Bellamy discussing tonight’s plans with another staffer that she’s friendly with. Naturally, they hushed up when I walked into the room, but not before I heard mention of drinks, dinner, a club and some sexy guy everyone wants Bellamy to meet. Not that anyone asked my opinion, but I was fine with all of it. Until I heard about this sexy guy. The idea of Bellamy hooking up with some faceless sexy guy rubs me the wrong way.

Matter of fact, it rubs me so wrong that it wrecked most of my afternoon while I tried to convince myself that I’m not jealous.

This was an unexpected and unwelcome development. I can’t figure out when things went sideways on me. Can’t stop wishing I could get this runaway genie back in the bottle.

Don’t get me wrong. Bellamy is a grown woman. I’m sure she’s had sex since she joined my company’s payroll. I never thought about it. Never cared. Until this afternoon, when the information about her personal life whacked me on the back of the head like a nail-studded two-by-four swung by Barry Bonds.

The bottom line? I don’t like the idea of my Bellamy (not that she’s my Bellamy, but you know what I mean) spending her birthday fucking some loser, and I’m not crying over the fact that I have the power to put the kibosh on those plans, at least temporarily.

I’m not crying at all.

She blinks. Reins in her frown with what looks like a significant amount of effort. “How late?”

To her credit, she manages a smile. A crooked smile, but still credible.

“Not at all,” she says, glancing around just as a nearby couple get up and leave their table. “Why don’t I just sit over there, since there’s no room at this table? Damon. Ryker. Hope you two have a great night.”

“Hope you get to enjoy what’s left of your birthday, Bellamy,” Ryker says.

“Don’t let him give you too much shit, Bellamy,” Damon tells her.

With that, she turns to go while also unwrapping that blue shawl and giving me a spectacular and mouth-watering view of the body she normally keeps tucked inside her business attire. Tonight? It’s poured into a little black dress with heavy emphasis on little. It’s got no sleeves. No nothing other than a stretchy tube that bares a fair amount of cleavage before clinging to her hips and ass and trailing off well before it hits her knees. But before I can lament the fact that I can’t see much of her legs, she takes another step, revealing a slit and a juicy stretch of thigh.

The sort of thigh a man wants wrapped around his waist when he’s buried deep inside a gorgeous woman.

I’m not shitting you when I say that the sight of that glowing skin, shifting hair and insane figure is like a lightning strike to my entire existence.

My head commands me not to do anything stupid. My dick commands me to fuck her as soon as possible. Something deep inside me—trapped somewhere between my chest and my gut—wonders what the fuck is happening to my world tonight.

My turmoil is intensified when she glances back over her shoulder and gives me just enough of a lingering look for me to wonder if she wants me to come hither.

Or maybe that’s just my runaway hormones projecting things onto her.